Scott Melvin, Executive Director of Performing Arts, has worked extensively with choirs and orchestras throughout California and the Western United States. He has conducted choral ensembles and orchestras throughout Italy in some of the world's most remarkable venues including the Sistine Chapel, St. Mark's in Venice, St. Peter's and St. Ignatius in Rome, and the beautiful Basilica di Santa Maria del Fiore in Florence.

He is currently the Executive Director of Choral Music at Mater Dei High School in Santa Ana, California where all of his ensembles have performed throughout Southern California receiving numerous superior ratings and awards. They have toured extensively including Italy, Australia, Germany, Austria and the United States including New York where the Mater Dei Chamber Singers placed first in the Heritage Festival of Gold series (2008), performed as the featured choir of the National Youth Choir in Carnegie Hall (2013) and sang on the TODAY Show as part of the Toyota Concert Series (2013). Ensembles from Mater Dei have also won competitions in San Diego (2005), Orlando (2006), Chicago (2009), San Francisco (2010), Seattle (2012), New York (2015), Boston (2017).

In addition, Mr. Melvin is the Director of Music at Christ Our Savior Catholic Parish in Santa Ana and Choir Director at Sts. Simon and Jude Catholic Parish in Huntington Beach. He is a frequent clinician throughout the Southern California area. Mr. Melvin is a member of the American Choral Directors Association, International Federation of Choral Music, Music Educators National Conference, California Music Educators Association, Chorus America, and the National Association of Church Music. He lives in Southern California with his wife, Debbie and their three daughters, Emmerly, Nola and Aveline. 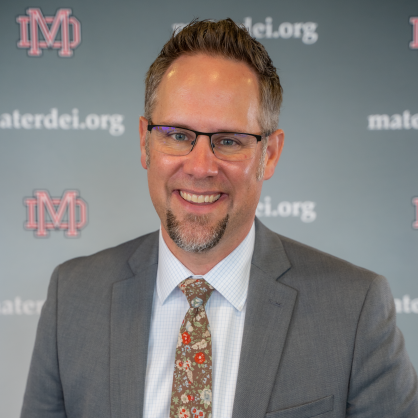