Mr. Michael “Mike” Brennan joined Mater Dei High School as President in February 2022.  Born and raised in Anaheim, he attended Chapman College (now Chapman University) on a basketball scholarship and was studying sports medicine when his professor and mentor, Monte Smith, suggested that he consider being a teacher.

His educational and administrative experience include serving as a member of Anaheim High School’s faculty, an assistant principal at Western High School and principal of South Junior High School —all campuses within the Anaheim Union High School District. Mike also served on the city of Anaheim’s Parks and Recreation Commission from 2006 to 2014.

After going through the RCIA program, Mike yearned to serve his Catholic faith while utilizing his years of experience as an educator and administrator. He answered the call to join Servite High School where he served as principal for 15 years. During his tenure, Mr. Brennan played a pivotal role in developing Servite’s formation and academic programs. He helped escalate the athletic program’s status as powerhouse in the Trinity League and the State of California. With background in sports, Mike was appointed Trinity League President and was named chairperson for CIF Southern Section Orange County League Placement.

After 15 years at Servite, Mike moved onto St. Anthony High School in Long Beach serving as their president until he answered the call to come back to Orange County as Mater Dei’s president.

What I Love About Mater Dei
I have always had a great respect for the entire Mater Dei community. I am deeply humbled and grateful to have been selected for this position and I look forward to developing life-long friendships and collaboratively working to help Mater Dei become the best version of itself. I am committed to Mater Dei’s mission to form young people into Monarchs by teaching each student the principles of Honor, Glory and Love. 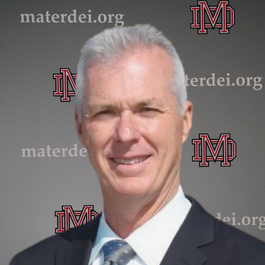