About
A conductor and pianist, Jodi has had lifelong involvement in choral music. In her eighth year of teaching, Jodi has been the director of two accomplished high school choral programs, and loves performing and traveling with her groups. She was the first female conductor to place first at the prestigious Golden State Choral Competition, which she has since won several times. Her choirs have placed first at numerous national competitions in New York, Chicago, Nashville, and Seattle.

Some notable performances include conducting her Chamber Singers on NPR’s nationally syndicated radio show From the Top, reaching over a million listeners, selected by blind audition to perform at the 2018 American Choral Directors Association Conference, international concerts at the Santa Maria de Montserrat Abbey, the Bilbao Guggenheim, La Sagrada Familia, and a full concert in 2019 under her baton in Carnegie Hall and the beautiful St. Patrick’s Cathedral in New York City. Her choirs have received honors for their beautiful tone and artistry throughout the country and internationally.

Jodi Reed and her husband are the parents of six children, three of which are proud Monarchs, and grandparents of two boys, Parker and Micah. Jodi enjoys scuba diving and any time spent at the ocean.

What I Love About MD
Mater Dei is incredibly positive and supportive for both students and staff. I love that that students are encouraged to try new things, expand, and get involved. Catholic values are instilled into each student with a high emphasis placed on service. All of these things make Mater Dei a tremendously nourishing place for our students to get an education.

Other experience: In addition to her work with Mater Dei High School Choirs she is the California conductor with Millennial® Choirs & Orchestras. 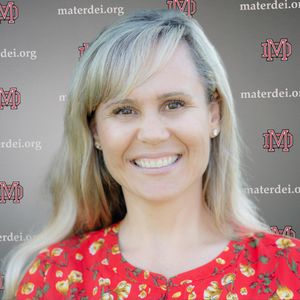