About: Before Mr. Mulholland landed his dream position of teaching Latin, he had a varied teaching career.  He taught the History of Japan; the History of Biological Science, 1500-1990; and Survey of Ancient Western Civilization 5,000 BC - 814 AD while a graduate student at UCLA.  As a high school teacher, he has taught AP European History, Summer School English, Intro to Catholic Christianity, Journalism, Pre-Calculus, Pre-Calculus Honors, AP Calculus AB, World History, AP Comparative Government, AP American Government, and Honors Latin IV.  Since 2004, he has been the Lecturer in History for the award-winning MD Academic Decathlon Team.  Occasionally, he has also been a dramaturge for the MD Theatre.  Currently, Mr. Mulholland teaches all four years, both honors and college-prep courses, of Latin at Mater Dei High School as well as 2 classes of AP US Government and Politics.

When not teaching, he enjoys spending time with his wife and four children, cooking, reading, and playing video games.

Master of Arts in Ancient Roman History - UCLA; Bachelor of Arts in Classical Civilization with an emphasis in Religion and Mythology - UCLA 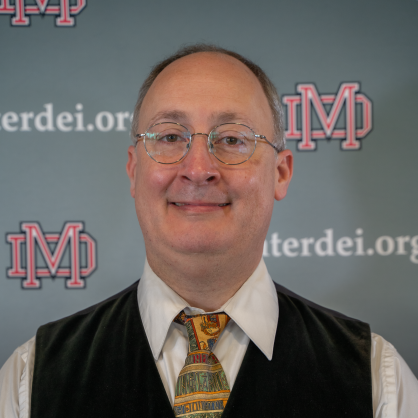